The global identification challenge: Who are the 1 billion people without proof of identity?

According to the World Bank Group’s 2018 #ID4D Global Dataset, an estimated one billion people around the globe face challenges in proving who they are. They struggle to access basic services – including access to finance and even a mobile phone – and may miss out on important economic opportunities, such as formal employment or owning a registered business. The implications of “providing legal identity for all, including birth registration” go beyond individual rights and opportunities: being able to reliably verify the identities of their population is critical for countries to deliver services efficiently, strengthen their ability to raise revenues, and foster growth in the private sector.

This week 1,600 delegates – government officials from 47 African countries, development partners, and the private sector – are gathered in Abuja, Nigeria for ID4Africa to help accelerate progress in closing the identification gap on the continent, where over half of the 1 billion ‘uncounted’ reside. Accurate data on who these people are is vital for all stakeholders to close this gap, and especially to “leave no one behind”.

This year, over 40 country authorities provided direct data on foundational ID coverage - a record number.  Using a combination of the self-reported figures from country authorities, birth registration and other proxy data, the 2018 ID4D Global Dataset suggests that as many as 1 billion people struggle to prove who they are. The data also revealed that of the 1 billion people without an official proof of identity:

Changes in the global estimate from previous years’ figures are due to better data sources and improvements in the methodology (for details, please see the ‘Methodology’ tab of the Dataset), as well as progress toward closing the gap.

#ID4D-Findex survey data: ID coverage gaps are largest in low income countries, with women and the poorest 40% at greatest risk of being left behind

In addition, to further strengthen understanding of who the undocumented are and the barriers they face, ID4D partnered with the 2017 Global Findex to gather for the first time this year, nationally-representative survey data from 99 countries on foundational ID coverage, use, and barriers to access. Early findings suggest that residents of low income countries, particularly women and the poorest 40%, are the most affected by a lack of ID.   The survey data (albeit limited in its coverage to people aged 15 and older) confirm that the coverage gap is largest in low income countries (LICs), where 38% of the surveyed population does not have a foundational ID. Regionally, sub-Saharan Africa shows the largest coverage gap, where close to one in three people in surveyed countries lack a foundational ID. 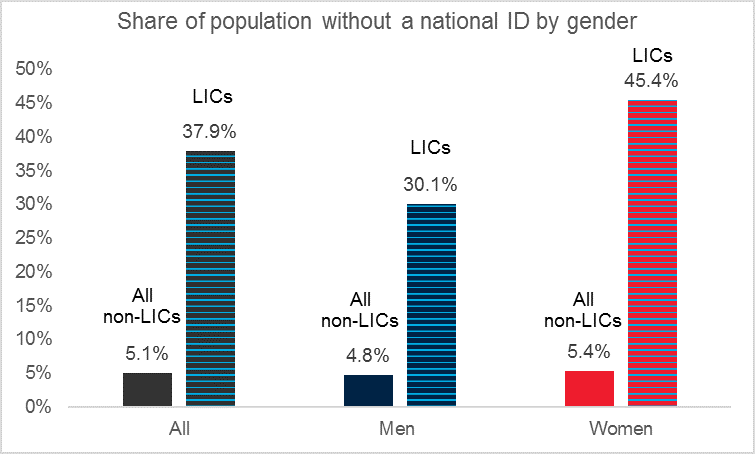 The poor are disproportionately affected by lack of ID, with LICs showing the largest income-based gaps.   Across the LICs surveyed, 45% of those in the poorest income quintile lack a national ID; for the richest quintile, the figure drops to just 28%. The high fees charged for IDs in many countries and the cost of obtaining the required supporting documents is a key barrier for the poor. 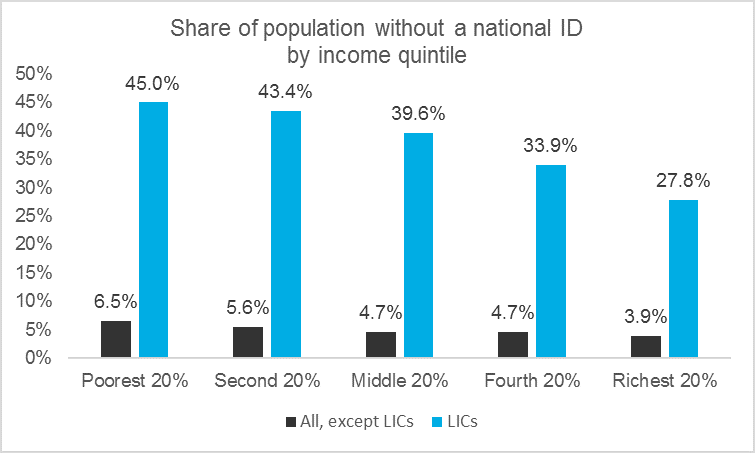 Ready for a deeper dive?

For more insights on the global identification challenge, please visit the ID4D website, where the 2018 ID4D Global Dataset is now available for download. Keeping track of the recent developments about ID systems across 198 economies is a continuous effort – we welcome your suggestions for improvement. Analysis of the survey data on identification is ongoing and additional findings and data will be published soon – watch this space! In the meanwhile, the survey-based national ID coverage figures are available for 99 countries in the Global Financial Inclusion database. For me, not just an ID but any verifiable ID is key to growth of any economy. The financial sector to be precise

Does this take into consideration the UIDAI project (even if it’s being heard in the Supreme Court of India) that claims do have enrolled a lot of people in India?

Obviously, lack of appropriate and reliable means of identification or improvements on it thereof, has great implications for the realization of the Financial Inclusion goals, especially as it relates to access to credit.

Obviously, lack of appropriate and reliable means of identification or improvements on it thereof, has great implications for the realization of the Financial Inclusion goals, especially as it relates to access to credit. Kenya.