Flood risks affect almost 2 billion people worldwide.  Climate change and unplanned urbanization will further increase these risks. The impacts on economies, communities, and people can be far reaching.  In 2022, flooding in Pakistan killed more than 1700 people, affected 33 million, and caused damages and economic losses of over US$39 billion. In the same year, Nigeria and Australia were also hit by devastating flood events. To better manage these risks and build more resilient communities, detailed and accurate flood hazard and flood risk maps are essential.

Flood hazard maps identify areas affected by floods of different probabilities. They provide valuable information about the predicted flood depth and flow velocity. Flood risk maps, meanwhile, present the potential impact of floods on human health and life, economic activity and infrastructure, cultural heritage and the environment. The maps are a key instrument for integrated flood risk management. They are an important tool for raising awareness about areas at risk of flooding and for helping communities develop strategies for reducing these risks through structural and non-structural measures. Civil protection and first responders can use the maps to plan emergency response and the insurance industry refers to the maps and the underlying data to design flood insurance products. The maps are also essential for land-use planning and urban development to avoid creating new risks.

Bulgaria and Romania are two countries that have taken a leap forward in modernizing their approaches to flood mapping. The World Bank supported both countries to update their national flood hazard and risk maps (FHRM) as part of the drive to implement the second cycle of the EU Floods Directive. 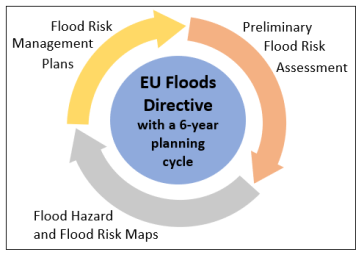 With the World Bank’s support, FHRMs have been developed for different sources of flooding including fluvial, pluvial, flash floods, coastal flooding for all identified APSFRs. Developing accurate hazards maps requires vast amounts of input data ranging from spatial data (e.g., land-use, digital terrain models and cross sections of rivers), meteorological and hydrological data, as well information on the existing hydrotechnical infrastructure and their operational rules. This information feeds into hydrological and hydrodynamic models to simulate how flooding spreads across the landscape. Modeling is carried out for synthetic flood events with low, medium, and high probability, e.g., flood events that statistically occur once every 1000 years, once every 100 years and once every 10 or 20 years.

Both Romania and Bulgaria have invested heavily in improving the input data. In Romania, for example, new digital elevation models for an area of around 28,000km2 were produced using data from airborne LiDAR - a remote sensing method using planes to survey the elevation - and measurements from more than 33,000 river cross sections. In Bulgaria, aerial photogrammetry mapping carried out alongside field surveys to collect additional data related to river cross sections and hydraulic structures, produced new maps covering an area of over 2,500km2. Modeling was completed with sophisticated free and commercial software, mainly two-dimensional modeling with unsteady flow . In addition to the low, medium, and high return periods, both countries also examined a climate change scenario.

To produce flood risk maps, information on the elements exposed to flooding is needed. This includes information about the population and their housing, social infrastructure such as schools and hospitals, transport infrastructure, industrial sites, agricultural land, protected areas and other types of assets and natural elements. The flood risk maps use a qualitative approach to identify areas of low, medium or high risk. More detailed risk maps that use a quantitative approach present the potential risk in monetized damages per square meter. This detailed information is used to calculate the economics of various investments in flood risk management using cost-benefit and multicriteria analysis.

In Romania, orthophotos - aerial photographs or satellite imagery geometrically corrected such that the scale is uniform - of all APSFR were digitalized using innovative machine learning algorithms to identify and categorize all exposed elements. Floods can cause different degrees of damage for different categories of elements (residential buildings, social, economic, and cultural assets, transport infrastructure, farming land, etc.) depending on the water level. A relationship between the depths of the flooding and the damage was determined for each category and monetized for different sectors. Bulgaria followed a similar approach using an advanced geographic information system algorithm to perform risk analysis based on the results from the hydraulic modeling.

Using newly developed web viewers, the FHRMs were presented to key stakeholders for review and validation. After their approval, the maps were formally reported to the European Commission and published on the internet for all citizens. The new FHRMs are now being used in both countries to identify and prioritize non-structural and structural measures, ranging from nature-based solutions to various structural solutions to be integrated into new flood risk management plans.

The development of these maps is an important step forward in flood risk management for Bulgaria and Romania. Moreover, the flood mapping approaches developed here can serve as a model for other countries dealing with flood risks around the world.