Mitigating the poverty implications of COVID-19 in Afghanistan

Continued international aid, including through the Afghanistan Reconstruction Trust Fund (ARTF), is vital to create better lives for millions of Afghans and sustain development gains. The #ProtectTheGains series highlights ARTF projects that have made a real difference toward achieving a more prosperous, inclusive, and peaceful Afghanistan.

Mired in a prolonged conflict, facing an uncertain political climate, and beginning a tenuous peace process, Afghanistan was already in a difficult place when COVID-19 struck. Taking early action to preempt the potential consequences of the coronavirus crisis was a high priority for the government given the country’s fragile health infrastructure. But as for all countries grappling with the pandemic, the economic fallout from lockdowns has added to the unpredictability all Afghans face.

State-imposed restrictions across the country since March have forced many to struggle with unemployment, limited working days, or increased job insecurity.  “My son was earning 2,000 afghanis [about $26]* a month, but he is jobless after COVID-19,” grieved a 65-year-old unemployed man from Kabul. “My two sons-in-law help me with food. There is no other source of income.”

Without a reliable stream of income, some have had to sell their possessions to feed their families. “I bought my younger brother a phone for 12,000 afghanis [about $155] a while ago. I sold it back for 11,000 afghanis because I had no money and I bought food for the family with that,” said a 40-year-old mobile shop owner from Laghman province. Throughout the country, there are clear signs of anxiety about how deep and prolonged this crisis could be and its probable impacts on people’s livelihoods.

According to the most recent household survey data, close to 15 million Afghans across 2 million households are particularly vulnerable to economic lockdown. These households earn at least half their income from activities such as shopkeeping, street or market sales, or daily labor in construction, agriculture, or personal services.  Many families also rely on remittances from neighboring Iran and Pakistan, which are experiencing similar economic turbulence.

We have generated simulations relying on household expenditure survey data. Household survey data refers to the information collected about households’ expenditures and incomes, and socioeconomic characteristics of a nationally-representative sample of households in the country. This information is the main source to obtain indicators of poverty and welfare for the country. The results indicate that COVID-19 will lead to a marked increase in Afghanistan’s already high poverty rates.

Our calculations indicate that poverty may increase from a baseline of 54.5 percent to up to 72 percent  (see Figure 1). To calculate these impacts, the World Bank constructed three different scenarios. In the first scenario, projected declines in GDP from services (-7.5 percent) and manufacturing (-3.0 percent) translate into proportionate decreases in household incomes generated from those sectors (on average, 56 and 6 percent of household income). In addition, remittances are reduced by 50 percent at the peak of the crisis (April–June). 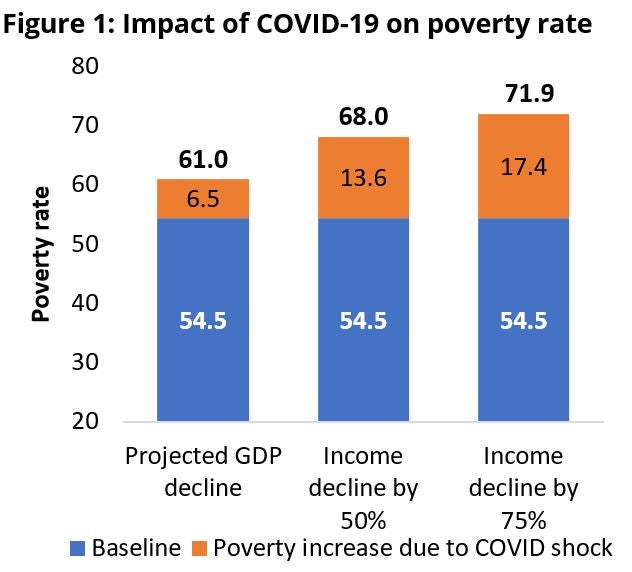 Source: World Bank staff based on 2016/2017 ALCS. Note: Poverty rates are simulated at the peak of the crisis.

Calculations indicate that poverty may increase from a baseline of 54.5 percent to up to 72 percent

In the second and third scenarios, household incomes from all vulnerable activities respectively decline by 50 percent and 75 percent in April-June. In all three scenarios, a smaller impact was assumed for the rest of the year, reflecting the bigger expected impact of the crisis during the first three months of the lockdown. Finally, a price shock equivalent to a 20 percent increase in food prices in April-June was added to the three scenarios simulated. 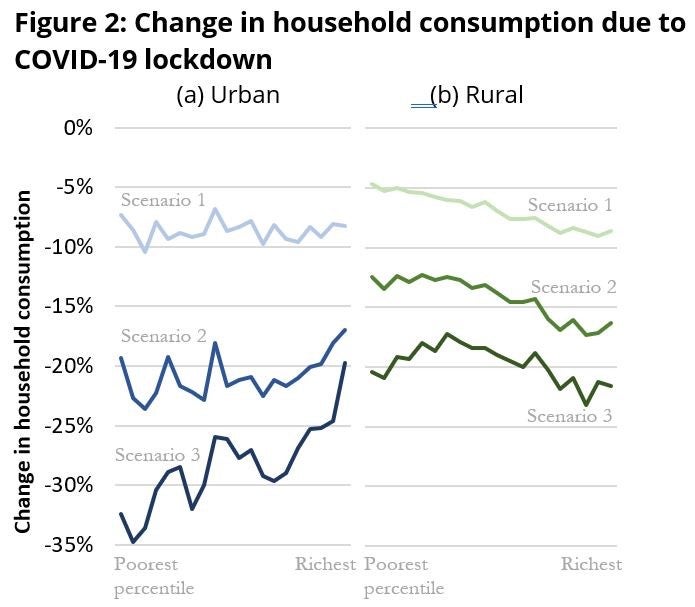 The analysis also shows that poverty impacts will be unevenly distributed across the population. Although both urban and rural areas are significantly affected, the laboring poor in the former are impacted the most, especially in the worst-case scenario (see Figure 2). For rural households, the decrease in consumption is larger for the well-off due to their dependence on vulnerable activities in the service sector (e.g. transportation, shopkeeping, etc.) and a marginally higher food price effect.

The poverty impact of the crisis on households with working women is similar in magnitude to those that only depend on male employment. Among other susceptible groups, households that identified themselves as displaced due to conflict or returned from refuge are more adversely hit.  Although they represent a small share of the national population (2 percent and 11 percent, respectively), the increase in poverty among these households due to the crisis is larger than the average increase for the country. In the worst-case scenario, poverty climbs from 46 percent to 69 percent for displaced households, while it jumps from 53 percent to 75 percent for returning households.

The lack of a social safety net amplifies the risk of them sliding into poverty.

The limited means of Afghan families to mitigate the effects of unexpected income losses means they must turn to potentially harmful coping strategies, like reducing spending on education and food or selling assets. It is calculated that on average only two months of basic consumption could be covered by selling assets, foregoing future earning capacity, and human capital accumulation. The lack of a social safety net amplifies the risk of them sliding into poverty.

To help reduce the potentially devastating poverty impact of the crisis and protect Afghanistan’s hard-won development gains, the World Bank has approved $300 million in grants to strengthen the health system and shore up key economic and public finance reforms. It has also worked closely with the government to restructure existing projects so that they can better support the pandemic response and the road to recovery.

Robust policy actions and reforms are much needed to restore the economy and support the livelihood of the Afghan people.

These include the Relief Effort for Afghan Communities and Households (REACH), and additional finance to the ongoing Citizen’s Charter Afghanistan Project (CCAP) that will strengthen community social protection and ensure the nationwide distribution of relief packages; a Emergency Agriculture and Food Supply (EATS) Project that will lay the foundation for food security and strengthen agribusiness by supporting smallholder farmers and micro, small and medium enterprises (MSMEs) involved in the food supply chain; and a longer-term Early Warning, Early Finance and Early Action Project (ENETAWF, in Dari) that will establish an adaptive safety net linked to a drought early warning system and an overall community resilience mechanism. These robust policy actions and reforms are much needed to restore the economy and support the livelihood of the Afghan people. Thank you for shedding light on the impact of COVID on the poorest households and the informal sector. REACH will provide dearly needed relief and we will lay the foundation for a nation-wide well targeted safety net program.