Remittances in times of the coronavirus – keep them flowing

In better-off countries, a strong safety net of social programs, unemployment insurance and direct payments will make all the difference in the depth of the current downturn and the speed of economic recovery. For poor countries and regions, remittances are the most important buffer for unexpected life expenses and investments into a better future. While large—global remittances peaked at $706 billion in 2019—this safety net is now frayed by job losses in the service sectors most reliant on migrant workers and shutdowns that fail to recognize remittance agents as essential services.

Even small changes in remittance policy can have a big effect on financial systems in developing countries over time. Given the scale and importance of remittances for people surviving on just a few dollars per day, actions to reduce the cost of transactions and make it easier to send and receive them can immediately improve the lives of migrants and their families. Given their significance to financial stability in many countries, such policies can promote recovery down the road. Faster adoption of digital financial services, which make remittances cheaper and more convenient, should be a priority once the immediate health crisis has been stabilized. 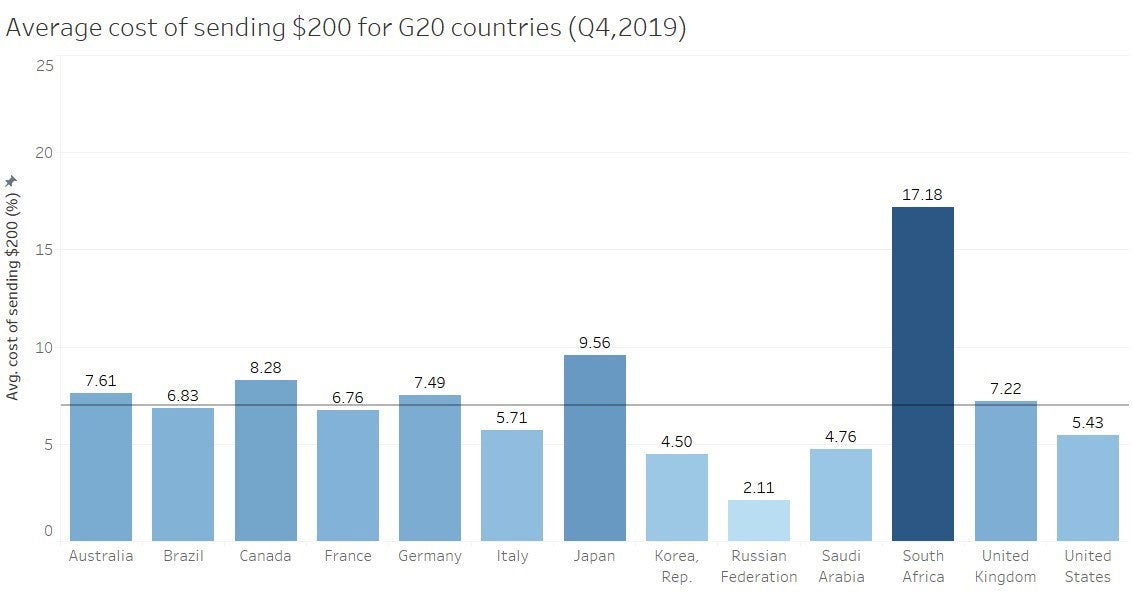 Those most reliant on remittances are the most exposed to the effects of the pandemic.

According to World Bank data , emerging markets and developing economies took in over half a trillion dollars of remittances in 2019. For 66 countries, remittances represented more than five percent of GDP, often exceeding foreign direct investment (FDI) and official development assistance (ODA) flows. They accounted for more than 20 percent of GDP for some countries, including Haiti, Honduras and Nepal. Some of the largest remittance-sending countries—the United States, Switzerland, Germany, France, and Italy—are locked down by the COVID-19 pandemic, and service-sector jobs have been hard hit from outset of the health crisis.   Migrants working in hotels, restaurants, and salons have lost their jobs, without potential government support. Worse, they cannot even go back to their countries of origin due to travel restrictions. This group needs targeted support.

Those who manage to continue working—in health care, for example—may struggle to send money amid shutdowns. Even in the best of times, sending and receiving remittances is not straightforward. For many, it requires a ride to the service provider at specific times of the day. During the mobility restrictions of a pandemic, sending cash remittances can become mission impossible when digital alternatives are lacking, or people are unfamiliar with them. In many countries, agents are closed without any specific provisions recognizing them as essential services. Where they have been deemed essential services, this information has not fully percolated to local authorities. Clients often face long queues, due to the lower number of agents and the shorter operating hours.

Where sending digitally is an option, other barriers may exist for senders and receivers.  For example, account ownership and usage of digital payments is not yet widespread among the biggest receiving countries, which limits options. Most developing economies that rely on remittances do not have a combination of high ownership of transaction accounts and high usage of digital payments.

Digital financial services not only make sending and receiving easier, they can also reduce the bite of fees into payments through technology-enabled scale. As of the end of 2019, the global average cost of remitting $200 was 6.82% or $13.64. Key remittance-sending countries have made pledges to reduce this cost in the last decade or so. Sustainable Development Goal (SDG) 10.c.1 aims to reduce this cost to $6 on average by 2030. The World Bank periodically tracks remittance prices of 367 major corridors through the Remittance Prices Worldwide (RPW) Database.

Being a cross-border transaction, a remittance transaction usually involves foreign-exchange conversion, unless the receiver can receive in the same currency as that of the sending country. In general Remittance Service Providers (RSPs) maintain positions in multiple currencies at a given point in time and set the foreign exchange conversion rate for remittances based on the prevalent rate. At times of increased uncertainty, like now, volatility in foreign exchange markets makes it difficult for RSPs to set the foreign exchange rates confidently, resulting in higher foreign-exchange-related fees. This, combined with the higher operating costs arising from operational disruptions, could put upward pressure on remittance prices in the short-term.

A call to action

Over the medium-term, recovery of remittance flows will be largely dependent on the success of the economic stimulus efforts of the G20 and other net-remittance-sending countries and broader migration and labor market dynamics.   Targeted efforts to support migrant communities in host countries are also urgent.

Over the near term, the World Bank recommends the following actions to support the remittances sector:

Over the medium term, the World Bank recommends the following key actions to accelerate the efforts to reduce remittance prices to respond to the challenges of widespread unemployment and the plight of migrant communities in host countries:

In the meantime, the World Bank will continue to monitor and report on the availability of remittance services worldwide and work with stakeholders to improve the transparency and efficiency of the remittances market guided by the CPMI-World Bank General Principles for International Remittances. Remittance receiving countries can increase incentive for the remitter which actually reduce the cost of sending money.

1.One of the incentives would be connecting mobile account with someone’s bank account.
2. Promote & roll out digital payment & transactions throughout the country and across borders. Mostly in developing countries.

Usually immigrants with good income have their families with them . It is only poor immigrants whose income earnings is low and the needs of their families back at home is also high. Most of these families are large and highly uneducated. This also adds to the problem. In poor countries , where immigrants families live in remote areas the problem is all the more severe. they are financially excluded with no banking infrastructure. Consequently the cost of sending remittances is also high due to existence of several players , each charging there fees. With poor safety nets these people are highly marginalized.

In the time of the Corona-Virus Situation. People prefer online Money transfer. And a lot of companies get a lot of advantages with online money transfer. Just like Western Union and AC Money Transfer.

I agree with the following statement of World Bank.

"According to World Bank data , emerging markets and developing economies took in over half a trillion dollars of remittances in 2019. For 66 countries, remittances represented more than five percent of GDP, often exceeding foreign direct investment (FDI) and official development assistance (ODA) flows."