Let love rule: Same-sex marriage in the U.S. and the world 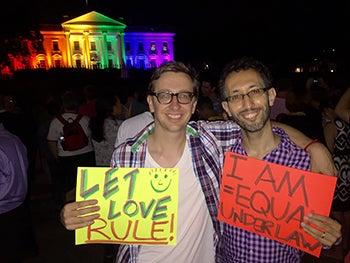 Celebration in front of the White House on
Friday, June 26.
By the World Bank Sexual Orientation and Gender Identity Taskforce*

This past Friday, June 26, 2015, the US Supreme Court issued an historic decision in favor of equality – recognizing the rights of same-sex couples to get married across the entire United States. This is a moment of personal joy for thousands of families but also a momentous declaration of what equal protection of the law means. As a global development institution, the World Bank has an international workforce that reflects the diversity of its member countries. We welcome this decision of the US Supreme Court - not only for the justice it brings to LGBT staff, but also because it exemplifies principles that are fundamental to inclusive and sustainable development.

Along with the recent referendum in Ireland, same-sex marriages are now performed or recognized in 24 countries across every region of the globe, except for most countries in Asia – from South Africa to Mexico; Argentina to New Zealand.

Why is marriage important? In the words of Justice Anthony M. Kennedy who wrote for the majority in the historic decision of the US Supreme Court, “No union is more profound than marriage, for it embodies the highest ideals of love, fidelity, devotion, sacrifice and family. In forming a marital union, two people become something greater than once they were. ” And through the institution of marriage, LGBT families become visible to the state, and thus entitled to receive the benefits and protections that come with such recognition.

However, the decision on Friday is bittersweet.

Progress in the US and elsewhere comes against a backdrop of continuing – and in some cases worsening – discrimination in many parts of the world. 81 countries criminalize some aspect of being LGBT. ‘Anti-gay propaganda’ laws have rekindled ignorance, fear and prejudice in too many countries, and in 10 countries you can legally be killed simply for being who you are.

These laws have far-reaching implications for developing countries – and their impact on poverty and shared prosperity is a core concern for the World Bank. Millions of LGBT people in the developing world live in fear of having their identity revealed and face discrimination, prison and violence. When LGBT kids are bullied and kicked out of school, or when LGBT people are refused a job and housing, subjected to violence by family, strangers and police alike and refused access to medical care, they are denied the opportunity to contribute fully to society. Everyone is worse off when some are left on the side of the road to development.

No talent can or should be wasted. Just imagine how much LGBT people could contribute to social and economic development if they were liberated from these fears and no longer discriminated against. Successful economies have inclusive institutions that respect the full potential of each and every citizen.

US President Barack Obama noted in his address following the Supreme Court decision that the pace of change in the US has been remarkable. Just over 10 years ago same-sex marriage was legal in no US state; as of this past Friday it is legal in all 50. In no small part this previously inconceivable progress has been achieved through the courage of a few who chose to break the silence and make themselves known. History is on the side of the champions who did not let them stand alone.

This should give us hope that even though the path to positive change in many places seems incredibly steep, blocked or currently unthinkable, the courage of a few to stand-up for equal dignity, respect and to connect through love can really change the world.

We at the World Bank are proud to stand with them at this historic moment in the march towards inclusive and sustainable development. Thanks, Nicholas and others, for this blog posting. Can you elaborate a bit further what the World Bank is actually doing in terms of analytical work and operations to address the negative developmental impact of LGBTI discrimination.

Thanks Kees. The Bank has been addressing the development effects of LGBTI discrimination through a range of operational and analytical work. Operationally, this has included work on health (Vietnam, Niger, Barbados and others), urban (Brazil), violence prevention (Brazil) and economic inclusion (Indonesia). Research has included the economic costs of homophobia (India), a gender assessment (Philippines) and a country diagnostic (Uruguay). The Bank is now looking to grow this area, one example being analytical work that’s just starting in the Western Balkans that aims to quantify differences in development outcomes for LGBTI people compared to the population at large.

Thank you for such a thoughtful piece Nick! And thank you for reminding us that as we celebrate this bit of progress, there is still a lot of work to be done and brave souls to support.

Dear Nick, very good article, congratulations. I had suggested the Task Force to back up my idea of exploring south-south knowledge exchange among public and civil society organizations from developing countries and those in Latin America where such a momentum for legal frameworks and public policies supporting LGBTI rights has been reached or elsewhere (i.e. Mozambique). Hopefully you can pass this knowledge exchange idea. I volunteer to explore working to contact key Latin AMerican public authorities and experts but we need the formal back up of the Task Force.
All the best,
Fernando Montenegro Torres

This is a timely and excellent opportunity. It also fills a largely-ignored perspective. There are however a number of considerations that may be useful. Firstly, at this inception stage it is vital to reflect on how that idea can be popularised within the Bank itself, especially in country or local offices. The levels of negative attitudes towards lgbtiq rights remain high in a lot of countries where interventions are necessary, and it should also be imagined that such attitudes do not spare local staff of international organisations. In such circumstances, it becomes necessary to ensure buy-in and unity-of-purpose beyond the Task Force especially at country level, to ensure unified and non-compromised initiative. Secondly, I hope that the Task Force will engage strategic non-lgbtiq allies (especially in the global south) in order to exploit a vast resource of people who are not lgbtiq but are willing to support such causes. All the best!!