Abdullah* used to be a police officer, but now farms his own land in Paktia province in the east of Afghanistan. The economic crisis has hit him hard, its effects exacerbated by drought. His income has fallen substantially and is less reliable than his former paycheck. He struggles to feed his family and they often have to skip meals.

Abdullah exemplifies the trajectory Afghans have experienced since August 2021. He participated in an anonymized phone survey, along with thousands of other respondents from across the country, conducted from October to December 2021 by the World Bank. The Afghanistan Welfare Monitoring Survey includes a sample of households that previously participated in household surveys conducted by the National Statistics Information Authority . For this survey they were re-interviewed, providing a representative sample of Afghan households across all regions of the country.

This household level data suggests that the downturn in welfare outcomes in Afghanistan is being largely driven by a sharp decline in overall economic conditions , more so than by specific actions introduced by the interim Taliban administration.

Earnings have fallen dramatically, with 4 out of every 5 people interviewed reporting a significant decline in their earnings in the month preceding their interview.

Almost everyone is looking for work; no one can afford not to. Unemployment has increased, as has the proportion of people relying on informal employment. Earnings have fallen dramatically, with 4 out of every 5 people interviewed reporting a significant decline in their earnings in the month preceding their interview. Salary payments of workers in both the public and the private sectors have become inconsistent. Many remain unpaid.

The public sector has also shrunk dramatically. This reflects a large drop in the share of public sector workers engaged in security forces and administration.  These two job categories have declined by two thirds. The bulk of workers rely on informal employment or day labor. However, there has been no significant decrease in the number of public sector employees who are health workers or teachers 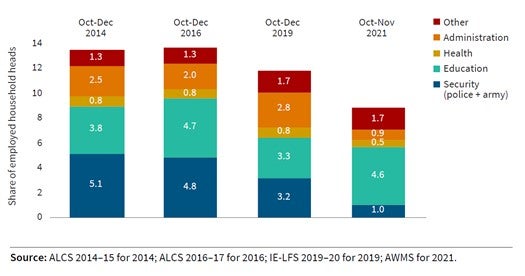 With less money and rising prices, many are going hungry. The share of respondents reporting that their households were unable to cover basic food and non-food needs has doubled to 70 percent compared to May 2021.  The effects of the economic downturn are exacerbated by drought, which has reduced domestic food production and driven up prices.

Almost all household heads reported an increase in the price of cooking oil and wheat flour, necessary ingredients for the dietary staple, naan . In order to cope, households have had to cut back on the number of meals and portion size and resort to lower quality food.

In urban areas respondents attribute the decrease in girls attending secondary school to restrictions imposed by the interim Taliban administration.

While the deterioration of the economic situation in recent months has had a negative impact on household welfare, the provision of health and education services has held up.

The proportion of households reporting that their children are attending primary school has increased substantially for both girls and boys relative to Fall 2019. However, boys are more likely to attend both primary and secondary school, while gains for girls are concentrated in rural areas and at the primary level .  The improvement in school attendance in rural areas, especially for girls, may reflect an improving security situation. In contrast, in urban areas respondents attribute the decrease in girls attending secondary school to restrictions imposed by the interim Taliban administration. 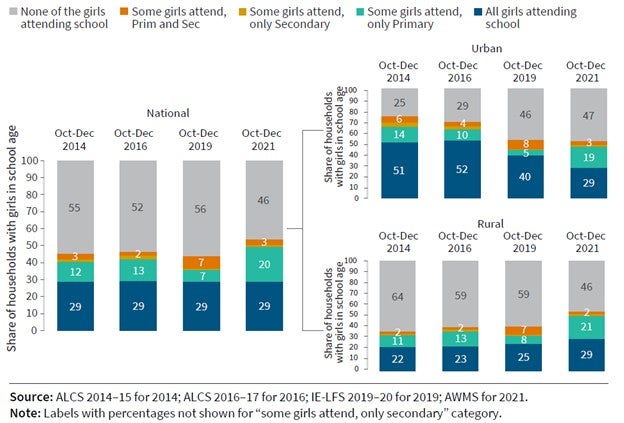 The suspension of international assistance also threatened the viability of the national health system and raised fears of collapse. However, in the October to December survey period, access to health services has been largely maintained. 94 percent of those needing healthcare reported that they were able to access a local public or private health facility, in both urban and rural areas, with no evidence of gender discrimination.

Survey results suggest that while many Afghans are still able to find informal work and access key public services, the situation is quite fragile.  Food security indicators suggest a drastic decline in welfare outcomes, and access to services could severely deteriorate unless salaries can be restored for key service providers.

The Afghanistan Welfare Monitoring Survey was administered by phone from October-December 2021. Full results and methodology are available here

*The survey respondent’s name has been changed for the purposes of this publication.